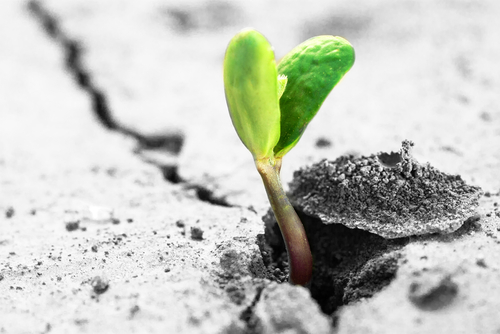 You are an entrepreneur and have set up a beautiful business. Your company has a loyal and committed staff, willing to invest in new clients. Your business is growing and is ready for the next step. But what themes can be used to stimulate growth? Moreover, what could hurt that corresponding growth? What does this mean for your own role in the company?

A development in the growth of organisations is described by the American organisation expert Larry E. Greiner In 1972, he developed the 'Greiner Growth Model'  which describes the phases a business goes through as it grows. He maintains that a growing organisation experiences six different phases. Each stage marks a growth trajectory and will conclude with a brief 'crisis'. In this article, I will discuss the first phase, because the companies I advise often undergo this first crisis, and it is important to properly manage or avoid it.

The first phase is called âgrowth through creativity.â A small young company always starts in the "pioneer phase". Through further growth in size and years of life, the organization becomes more complex and can coordinate much more efficiently; the internal control of the company can no longer be managed by a single person. This shows that the company is ready to move to the next phase, the management phase. In this phase, there is more need for structure and decision processes from the formal leadership.

The growth to the next phase is characterised by growing pains. Growing pains occur when the organisation is sufficiently in line with the growth and complexity of the company. Often, small businesses experiencing this feel many things, characterised by the following:
â¢ That there are not enough hours in a day,
â¢ Too much time is being spent 'putting out fires',
â¢ They do not know what others in the company are doing,
â¢ Have little sense of the direction in which the company continues to develop,
â¢ There are not enough good managers and they have to do it all themselves,
â¢ Feeling as though they want to make sure that it is done correctly.

Organisations can happily anticipate and prepare for the coming crisis.

A good example of a company which has dealt pro actively with its own growth is SPING -Wizards of ICT.  Not so long ago they had reported to me that they were experiencing growing pains. Their pioneering spirit and work method was being left behind more and more as they developed into their adult stage where they had landed. The growth themes that once propelled them now, more often than not, felt like a shoe on the wrong foot. How have we dealt with that, and what have we done?

We started by making a snapshot of the current situation. We then took the information we had and tested it against a large group, which would fit our growing pains model. A lot of this was very specifically focused on the behaviour factor. We primarily worked on creating awareness, naming and mapping the effective and less effective behaviour to make sure the management and growth potential for the next phase was set out well. A very entertaining and educational growth trajectory!

For SPING things worked out well. They were able to effectively move through their growing pains on to the next stage of their development. By just being aware of the potential that can be achieved by growing, a company can really fill out nicely. Knowing when to act in order to supplement that growth can minimise the internal damage, and help be more effective as a business.