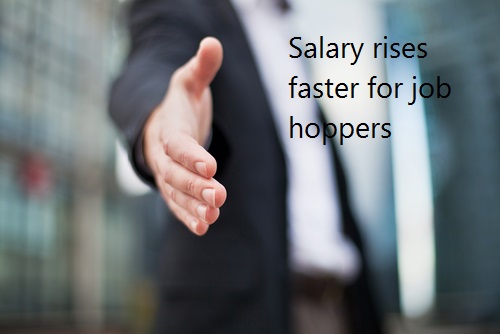 A new report from ADP showed that job-hopping pays off, at least in the United States,. ADP has done research among US workers in relation to wage developments for the third quarter of 2015. For employees in the same job, working for the same employer as last year, wages rose 3.5 percent. For Employees who switched employers, their pay rise increased by 6.5 percent.

However, this largely depends on the sector in which employees work. In the education and health care sectors, employees changing jobs only saw a 0.4 percent increase in their salary. In construction, job hoppers went ahead by the most, a staggering 19. percent versus 4.3 percent for employees who stayed with the same employer, followed by financial services.

According to ADP, this is a consequence of the scarcity of employment, thus increasing salaries. However, it is mainly young people who benefit. The older you are, the lower the increase in salary when changing jobs.

Generation Y (25 -34 years) receives an average of 7 percent when they change jobs. But even if they remain with their current employer, the salary rises for Millennials most of all when compared to the other age groups.
Those seeking to job hop in their early twenties will find it is hard to maintain, and there's a reason for that. Changing jobs can give them 17.5 percent more salary, while staying with the same employer would only yield a 4.5 percent increase. Of course, this high percentage increase is also due to the lower wage level of these young employees, compared to older employees. Researchers are trying to understand why youth change employers despite the risks of a job-hopping career, rather than stay for the security of long-term employment.