Facing conflicts in the workplace 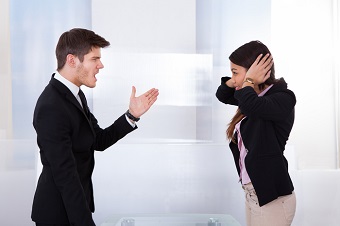 However, this description is too narrow and not covering the problem completely. Work disputes are thought to arise in a situation of mix-motived relationships of competition or cooperation. Thus, the traditional understanding of conflict can explain the competitive conflict environment but doesn’t really focus on disputes occurring in a cooperative one, where people with the same goal can still come to a disagreement. Defining well the problem at hand is not only a technical matter but an essential task for a proper management. Conflict in the workplace can be generally understood as incompatible activities, where one person’s actions interfere, restrict, or in some way disturb another’s actions.

Conflicts in the workplace are often thought to lead to destructive and negative consequences. On the contrary, if well understood and properly managed, conflicts can contribute greatly to team and leader effectiveness. When facing conflict, focusing on three main issues can help identifying if a certain dispute can be constructive and how to deal with it.

Those are: conflict resolution strategies, conflict type and motives of the participants.

1. Collaboration
There are different ways of approaching a conflict in the workplace. Some choose avoiding it, forcing external solutions or compromising. However, one strategy has proven to be mostly effective and that is collaboration. The reason for that is that different strategies have either high concern for the people involved in the dispute or for the outcome’s productivity. Collaborative conflict management focuses on both. It creates integrated and effective solutions to work problems and strengthens team work.

2. Task vs. personal conflicts
The conflict type can contribute either to success or failure. People tend to address disputes more positively when it is perceived as a task conflict, rather than a relationship or personal one. Discussions of opposing positions about a certain problem can be useful, while personal conflicts lead to interpersonal frustration and lower group productivity. Thus, task conflicts should be steered towards constructive outcomes while relationship conflicts should be minimized.

3. “Self” vs. “Others” orientation
When facing a conflict, there are two types of biases and motives that participants might have – self and others orientation. The first one usually leads to a win-lose interaction, where the second develops integrative and mutually beneficial outcomes. A self-oriented behavior promotes competitive approach to facing conflict, where one’s goals are at the expense of the other’s goals. On the contrary, people with others-oriented behavior believe that both parties’ goals can be positively linked – a win-win interaction. That promotes a collaborative approach to conflict management, achieving mutual goals and benefits.

When facing a conflict on the workplace, collaboration proves to be the most effective resolution strategy. However, it is important to be mentioned that collaboration is not always just a natural state of behavior but a conscious choice of interaction.