Dealing with Gossip in the Workplace 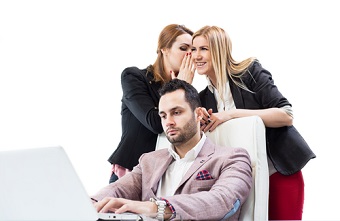 Two types of gossip pass through most work places: negative gossip and positive gossip. Both can be a welcomed distraction, but only negative gossip stands to mislead workers off their track to success. Typically defaming and slandering, negative gossip can be anything from instigating an alleged office affair to passing along rumors of a new employee’s inferior skills.

Negative gossip between colleagues acts like a virus: it infects the working relationships between co-workers as well as between boss and employee, and if not properly addressed, can lead to employment terminations and ruined reputations. A breakdown in this social fabric causes coworkers to become enemies, and while shots are thrown over lines of division, productivity and morale continue to decline.

1. Confront the Gossiper: Do this in a private location where others cannot overhear the discussion. Your goal is to focus on the issue and what will happen if the bad behavior continues (such as a written warning in their personnel file, demotion, loss of job, etc.) rather than ridiculing the person. If people who gossip about you believe that doing so brings no negative consequences, they have no incentive to stop gossiping. Conversely, if they know that you're on to what they're doing —and in particular, if you make your feelings known to them — you increase the chances that the gossip about you will stop. Not only will the gossipers get the message, but so will others who might be tempted to join in and gossip about you.

2. Deny Rumors: Gossip that is groundless can be extinguished with a simple denial. By blatantly bringing up the issue amongst coworkers and respectfully dispelling any truth, you take away your colleagues’ purpose in gossiping.

3. Ignore Rumors / Refuse to be Drawn in: If the main source of gossip lacks credibility with colleagues, it is sometimes best to ignore it, because by seeming upset you can mistakenly legitimize a rumor and make it into a bigger deal. Alternatively, you can refuse to respond to comments about a person with more comments about that person. Even better, try to subtly change the subject.

4. Spread positive gossip: Positive gossip can actually be good for companies and employees. This is when managers and employees share positive stories about the company’s products/services or individual employees, which can help employees feel proud of where they work, thus improving morale and helping reduce turnover.

CHECK OUR WORKSHOPS
SEARCH FOR JOBS